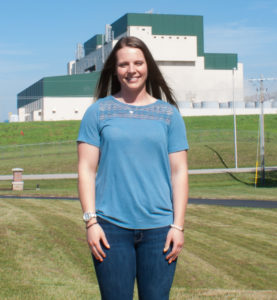 Prairie State Generating Company is excited to welcome Alec Jackson as the corporate safety intern for the summer of 2017.

Jackson, who is a first year graduate student at Murray State studying industrial hygiene, and a native of Dexter, Missouri, views her internship as an opportunity to expand her skill set by getting hands on experience in a new industry. Previously she held internships with Pepsi for two straight summers.

“My work experience in safety is within production and manufacturing,” Jackson said. “I really wanted to try something different and the energy sector really interested me. Mining is a whole different ballgame and it isn’t covered in my curriculum, so I’m able to get hands on experience by coming here.”

Currently, Jackson is creating emergency action and emergency response plans as well as a safety management system for the corporate office. She is also working on a proposal for a power plant egress plan which will help employees get up and down the power plant’s stack in a safer manner.

Jackson’s reasons for working in occupational safety and health align with one of Prairie State’s core values; get everyone home safe at the end of the day.

“I grew up in a blue collar family. I was always worried if dad would come home every day. I always hated that feeling especially since he lost co-workers on the job. I’ve also lost family due to occupational disasters and incidents,” she said. “When I got introduced to safety as a career, I fell in love with the idea and the curriculum. I can feel like I make a difference whether it is with one person or a lot.”

Following the completion of her master’s degree at Murray State, Jackson hopes to work internationally to help other countries raise their levels of occupational safety by creating and working with new safety programs in nations that may not be on the same safety level as the United States.